A downloadable game for Windows, macOS, and Linux

just found out v0.2 hasn't had audio for years. embarrassing.

please play v0.1 for now, I'll push an update as soon as I have access to the files again.

This is a bit of a different project for me, and a passion project at that: a port/remake of a lesser-known 1989 Famicom adventure game which, like most Japanese adventure games of the 80s and 90s (see: The Portopia Serial Murder Case, Snatcher, Policenauts) featured limited interactivity in a first-person perspective. I've always been intrigued by the genre, and after playing a little bit of Portopia I wanted to see if there was anything else like it out there I might be interested in. Enter Sukeban: Delinquent Detective, which never saw an NES release.

Hey, you try getting violent girl gangs past Nintendo of America.

I found 961 Co.'s game on a list of Famicom-only adventure games on a dead forum, and found a forgotten translation from 2007 on another one. I slowly worked my way through the game, bouncing between the emulator and sasori's script, and by the end I was both bummed an easy-to-access English version didn't exist and determined to make it happen. Seeing as I'm not a romhacker, and the controls, while admirably simple, are kind of awkward for the modern player—anyone who's played Maniac Mansion or King's Quest V for the NES knows that a d-pad control scheme for a point-and-click adventure game is not ideal—I've carefully adapted the d-pad + two button scheme to a two-button mouse setup. I've also done my best to cram in as much of sasori's translation as I could, since it wasn't really built to fit within the constraints of a UI. (To say nothing of the usual difficulty that comes with trying to fit English text in place of Japanese.)

Feedback is welcome! This is v0.2 and contains only about half an hour of Sukeban.

Some words on the name and history of the game:

Sukeban is known by two names, one used mostly in marketing and some game elements and the other on the final box and cartridge. The latter is simply Sukeban (「スケバン」, lit. "Delinquent Girl Boss") while the former has usually been translated as Sukeban: Delinquent Detective (「スケバン探偵」, lit. "Delinquent Girl Boss [Private] Detective"). The title should not be confused with Sukeban Deka (「スケバン刑事」, lit. "Delinquent Girl Boss [Police] Detective"). While the kanji are different, the meanings may have been similar enough to make 961 Co.'s lawyers nervous, especially with the release of Shouei System's licensed Sukeban Deka III game in 1988. 961 may have also just decided that the title didn't quite reflect what they were going for, as the story changed some in development.

The title screen simply says スケバン, but note this may have been a matter of screen space and aesthetics rather than an indication of how early or late in development the name was changed. Japanese games of the era frequently eschewed kanji entirely for space considerations, and chose to use only one of the two kana syllabaries (more frequently katakana, if you're curious).

I don't have information on when the game was first announced, but it appeared in several computing magazines and shounen monthlies throughout 1988 and 1989, touting its girl gang focus, its dark story, its less-common game mechanics, and

THIS IS ALL A LIE.

This ersatz Famicom game was made for the A Game By Its Cover Jam 2020 and is based on Denis Myzim's My Famicase design:

I stuck to the general shape of what the designer was going for in the Famicase and description, but also used it as a chance to play around with influences from games I mostly haven't played, like The Portopia Serial Murder Case and PC-98 VNs, and movies I mostly haven't watched, like the majority of the pink films that comprise the sukeban genre in the 70s. (The films I have seen are frequently energetic, inventive, gonzo, and surprisingly left-leaning while simultaneously being...porn films, for the most part, with a Cormanesque nudity quota and often torture and rape scenes intended to titillate. Unfortunately they're also basically the largest extant record of sukeban culture as it existed in the popular imagination and to some extent in reality, at least that I was able to find as someone who doesn't currently speak more than a few phrases in Japanese.) Hopefully I made something that doesn't feel too received in its inspiration.

This is also the first game I've made with graphics and a programming language that isn't a.) completely circumventable or b.) natural language, setting aside Twine and Inform 7 for the C-like scripting of Adventure Game Studio. I hope you enjoy my baby steps into pixel art and tracker music.

This game contains sequences of brief fullscreen flashes, especially of red and white, which may be dangerous to photosensitive individuals. The current version has a toggle to remove these quick flashes. Regardless, if you or your family have a history of seizures or epilepsy, consult a doctor before playing video games.

sukeban: delinquent detective
a game by chloe spears.
made in Adventure Game Studio.
special thanks to dana lubow for moral support, and for translating a certain item description from japanese. 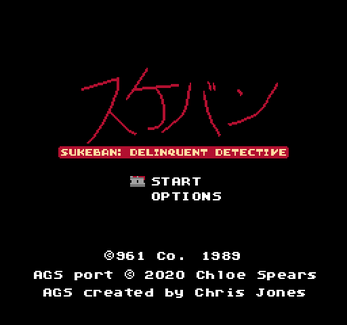 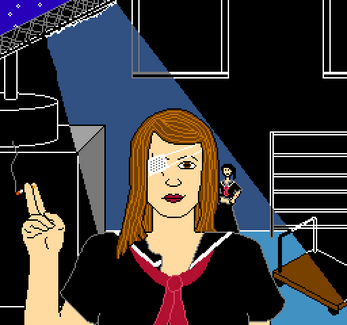